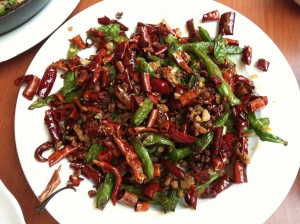 Eating out in Shenzhen is one of the wilder experiences in life. For one you must understand that the Chinese are in love with heat. Tea and food come to you in extreme temperatures. This is mainly for sanitation purposes, as in either smoking out your intestines with Szechwan spices or just simply boiling things to smithereens. An interesting tradition is when the boiling tea is served at the beginning of the meal which is then promptly used as a sanitizer for your utensils, eating bowl and tea cup. After you personally sanitize your dishware with the tea, you drink the remainder. Watch the video below to see the ritual that is performed at every meal.

This is how to eat Chinese food like a local:

After another hard day driving to various factories overseeing the production of the Paint Spy and indulging in another superb Chinese meal I decide to spend my last evening walking around the town of Shenzhen by myself. I had made a habit of walking the city streets but on this particular evening I strayed a bit further than I should have and I inadvertently got completely lost. I had no idea where I was. I walked aimlessly for over 3 hours, meandering over 6 miles trying to find my way back to the hotel, cutting through entirely foreign parts of town. Even though I had hopelessly ventured deep into strange neighborhoods and dark corridors well past midnight, I never once felt the slightest danger.

The reason it is so easy to get lost in this city is because it is impossible to keep track of any visual markers. Tall buildings, tightly packed together, rise up everywhere and the minute I made a turn, my sightline became blocked by another set of tall unfamiliar buildings. I felt like I was lost in a mouse maze. As I endlessly walked I got to thinking just how quickly this city came to be. It has taken all but 30 years beginning in 1979 to grow from a small fishing village of 30,000 to over 15 million, and it is still growing.

Located in the southeast of China, Shenzhen serves as a gateway between mainland China and Hong Kong. Shenzhen is roughly 1.5 times the size of New York City.

Mainly because of its location, Shenzhen was selected as an experiment in capitalism by late Chinese leader Deng Xiaoping in 1979. In 1980, Shenzhen became one of China Special Economic Zones (SEZs). Since then, this small fishing village has transformed into a modern metropolis where you can just about anything produced.

I finally found my way back to the hotel, got a good nights sleep amidst the chaos of China that still bustled beneath my window and woke up early in the morning for my flight back to my homeland. The good old US of A. I had our first production units of the Paint Spy in my briefcase and a true taste of the Chinese culture and cuisine.

Greg Macke is a professional car buyer and consumer advocate. He has worked closely in the industry to improve the buyers experience. His internet tutorials offer help to the car buying public. Visit him at https://carbuyingsupport.com/