Toyota Rewards a Customer With Brand New Toyota – Plus Another Car! 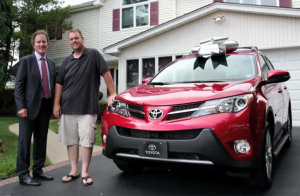 The 50-millionth Toyota sold in the US was a Camry. That was good enough reason for Toyota to reward the buyer of that Camry something special. Even though the buyer Michael Dee had financed his purchase, Toyota showed up at a family BBQ and gave the title to him. Toyota group vice president Bill Fay showed up not only to personally thank him for the purchase, but also to pay off the brand new Camry, giving him a clear title.
But Toyota had one more big surprise…

Watch the video below as he accepts his brand new 2013 Toyota RAV4. The whole thing was caught on tape. I was just waiting for this guy to start crying.

Select posts from down-downs below