Function over Fashion, that is the saying. Aside from fine art, Italian cars or certain runway models, no matter how beautiful something is, if it’s not functional, it’s not worth a damn. The Prius v Station Wagon however, is one of the best examples of cutting edge function, yet it can only be described as beautiful in the same way the head of an alien with an oversized brain is beautiful (there is a strange resemblance). And yet that analogy is not too far from the truth when you consider the beauty to the Prius really is its’ brains.

Aside from being so smart with the latest hybrid technology, the trump card of the Prius v is that it performs all of its’ functional tasks so well. 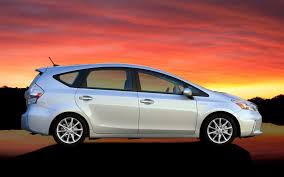 The 2012-2015 Prius v Station Wagon is a direct descendent of the traditional Prius that we have all come to love. Ok, there are people that don’t actually love the Prius and to them I say; how is your outdated, testosterone laden, overstuffed behemoth Hummer holding out on resale value? Thank you.

The original Prius debuted on American soil in 2001 as the first truly successful mass production hybrid car. You would be remiss not to grasp just how revolutionary that was at the time. Take a look around and you will see every car manufacturer now has their own version of a hybrid system. None of them except Toyota however can make the claim of having over 2000 patents on hybrid technology. It is because of this that most other hybrid systems can only hope one day to be as good as Toyota. NASA grade engineering brings rock solid reliability and that is why you see more Prii (yes that is the proper plural term) on the road than any other hybrid cars. Keep in mind that many of them have over 150,000 miles and still going strong. So much for that dead-battery phobia we used to obsess about.

However, Toyota introduced a couple of changes/ improvements for the larger Prius v. This included a “Pitch and Bounce” motor control which was engineered to help the longer body deal with uneven pavement. The Prius v also includes a redesigned engine coolant heating structure surrounding the vehicle’s catalytic converter and the exhaust heat recirculation system has been refined to reduce engine warm-up sequence.  Those that live in colder climates will appreciate the automatic switch valve that electronically controls coolant recirculation through the exhaust heat system thereby shortening heater response time in the interior on cold weather days.

The Prius v station wagon brings distinct advantages over the original Prius. A more spacious and functional interior with better controls, enlarged cargo area and far less blind spots due to the one window design rather than the split window found in the traditional Prius. It is not a fast runner and road feel suffers some from lack of feedback but that is not why you are buying this car. For the moment we have to rely on The Tesla for that experience. However you can buy a Prius v for each one of your 3 kids for the price of one Tesla. But I digress.

Tailor made to do just about everything right while still maintaining the throne “King of Hybrids” the Prius v can competently transport  a family of 5 with an extra-large haul of Trader Joes booty in the back. Not bad for a car that gets 44 miles per gallon city. Now that’s functional.

But is it really beautiful? Alien movies will never go out of style. I believe that will remain true for the Prius.

The Prius v comes in three different configurations: Models 1,2 and 5

Other options are available as separate option packages.

In August 2013, Toyota Managing Officer Satoshi Ogiso, who was chief engineer for the Prius line, announced some of the improvements and key features of the next generation Prius, expected to be introduced as early as 2015.

The next-generation Prius is being designed to deliver significantly improved fuel economy in a more compact package that is lighter in weight and lower in cost. These objectives are being achieved through the development of a new generation of powertrains with significant advances in battery, electric motor and gasoline engine technologies. The next Prius will feature improved batteries with higher energy density; smaller electric motors, with higher power density than the current Prius motors; and the gasoline engine will feature a thermal efficiency greater than 40% (in the current Prius is 38.5%). The Prius fuel economy has improved on average by about 10% each generation, and Toyota has set the challenge to continue to improve at this rate. The next Prius will feature the Toyota New Global Architecture (TNGA), which provides a lower center of gravity and increased structural rigidity. These features, along with other improvements will allow for gains in ride-and-handling, agility and aerodynamics. The improved aerodynamics will contribute to an all-new exterior design, which includes a roomier interior.